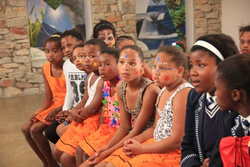 Over the last three years seven fast growing municipalities in South Africa have been teaming up to explore ways to enhance transition to a low emissions development model. They worked closely with other local governments from Brazil, India and Indonesia as part of the Urban-LEDS (promoting low emission development strategies in emerging economy countries) project, funded by the European Commission, and implemented by ICLEI – Local Governments for Sustainability, in partnership with UN-Habitat.

Two cities were selected as model cities in each of these countries to actively engage on a comprehensive methodological framework, known as the Green Climate Cities methodology, and integrate low-carbon strategies into all sectors of urban planning and development within their municipalities. This included the compilation of baseline reports, training workshops, development of strategies and implementation of projects. Five additional South Africa cities were selected to participate at secondary level through networking and training opportunities.

The South African project team at ICLEI Africa decided to implement community showcase projects in the participating municipalities. The aim of these showcase projects was to provide a practical example of what can be done in local communities to reduce greenhouse gas emissions and build resilience.

In Doornkop, situated 15 km north of Middelburg (Steve Tshwete Local Municipality), a 18kWp solar PV array was installed at the community centre to provide electricity to four community buildings. Two solar water heaters and additional lights were installed, including a solar streetlight. Ceilings were also installed in the day care centre and old age home to help with indoor thermal comfort. A video was made to showcase this example of off-grid solar for a low-income community, watch it here.

KwaDukuza municipality decided to support twenty care homes for foster children in Groutville, a newly developed area. Each of the care homes received a solar water heater, lighting retrofit, Wonderbag (insulation cooker), mobile solar light, a food garden and trees. This has helped these families to be more resilient through growing their own vegetables and reducing their energy requirements.

The Nelson Mandela Bay Municipality decided to focus on the Grootkloof Environmental Education Centre, which received a full lighting retrofit, 4,5kWp solar PV panels, solar water heater, as well as a rainwater harvesting with filtration system and full grey-water system. The centre now uses municipal electricity and water just as a back up. The centre also received a mobile solar light and Wonderbag (insulation cooker) for educational purposes.

The Mphe-Thuto Primary School were the project beneficiaries in Mogale Municipality, where the school received solar PV panels, solar water heater, lighting retrofit, skylights in class rooms and a solar pump for borehole water for the community food garden. The school’s feeding scheme also received a catering size Wonderbag (insulation cooker) to assist with the preparation of meals.

A full lighting retrofit and 4,5kWp solar PV system was installed at the Empangeni Library in uMhlathuze. This allows the library to reduce their consumption during normal workdays, but also to be able continue with the work during a power outage. They have also incorporated information on renewable energy as a focus for the library’s educational programme.

The most valuable lesson learnt was that implementation of a showcase project in a municipality sparks political and community-level interest and enthusiasm, and helps people gain a practical understanding of what change is possible.

However, demonstration projects are not enough. To support the mainstreaming of low emission development approaches in the longer-term planning of the municipality, ICLEI Africa worked with KwaDukuza and Steve Tshwete to develop strategies and action plans, and compiled Green Buildings Guidelines that can help encourage green economy thinking be used in new and existing building developments. Training and capacity building has also been a big part of the project. Municipal staff have attended numerous professional development and informal sharing training and events. Reaching out and involving local communities in the process involved the setting up of a renewable energy expo at Doornkop as an outreach programme for the local community and to get buy-in into the programme. ICLEI Africa also partnered with Schneider Electric to implement a community-training programme with a focus on access to energy, energy efficiency and safety around energy.

The combined impacts and learnings of this approach in Urban-LEDS: Of baseline assessments, strategy development, training and capacity building and community showcase projects, has resulted in a great deal of learning and created a replicable model to adapt to other contexts. ICLEI Africa and UN-Habitat would be delighted to work with you to make this possible.