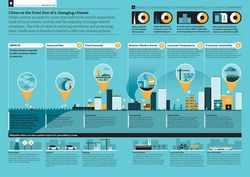 Scientists, corporate leaders, military strategists, financial analysts, and sustainability and conservation experts have all hailed a briefing series focusing on the implications of climate change for cities and various sectors.

Comprising the series are 13 briefings based on the Fifth Assessment Report from the Intergovernmental Panel on Climate Change, and compiled by the University of Cambridge Institute for Sustainability Leadership (CISL), and Judge Business School, in partnership with the European Climate Foundation, ICLEI – Local Governments for Sustainability and other sector-specific organisations. This publication comes ahead of the UN Climate Change summit in New York, hosted by UN Secretary General, Ban Ki Moon, which many of the world’s business and political leaders will attend.

Rajendra K. Pachauri, Chairman of the IPCC, said: “I applaud this initiative. Spelling out the implications of climate change for different sectors, on the basis of the work of the IPCC, will allow businesses to adapt to the challenges they face and understand the role they are able to play in reducing their climate impact.”

The series includes innovative and easily understandable infographics and key facts, and summarises the likely impacts of climate change on agriculture, buildings, cities, defence, employment, energy, investment, fisheries, primary industries, tourism, and transport. It also looks at the capacity for these sectors to adapt to climate change and to contribute to emissions reductions.

David Cadman, President ICLEI-Local Governments of Sustainability, stressed the relevance of the report for integrated climate action at the local level, a process led by local governments in partnership with business, industry and civil society. “This Cities Summary succinctly summarizes the key implications for urban areas. It is a must read for all local decision-makers”, said Cadman.

Among the findings highlighted and explained in the series are:
•The particular impact on cities of climate change, and the urgency of acting to protect people in urban areas (predicted to be 64% of the world’s population by 2050)
•The significant impact of climate change on agriculture, including reduced crop yields, and predicted food price rises of 37% (rice), 55% (maize), and 11% (wheat) by 2050.
•The potential for more energy efficient buildings to play a big part in reducing emissions
•The significant potential for the energy sector to reduce emissions, including by switching to lower-carbon fuels, improving energy efficiency, and introducing carbon capture and storage
•The disruptive impacts climate change will have on the stability of the financial system
•The potential for losses to global fisheries of up to $40bn by 2050
•The way climate change acts as a ‘threat multiplier’, driving involuntary migration and indirectly increasing the risks of violent conflict
•The need for additional energy supply investments of between $190-900bn per year from now until 2050, in order to meet the 2°C target.

All briefings can be downloaded at: www.cisl.cam.ac.uk/ipcc. The UN Foundation’s Climasphere will promote the series as part of its online announcements ahead of the New York Summit: www.climasphere.org.