Call for Papers: Symposium on Climate Change Adaptation in Africa 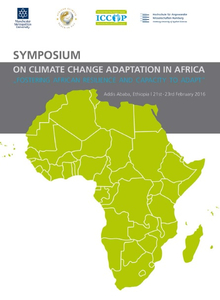 It is widely known that Africa is one of the most vulnerable continents to climate change.

As the Fifth Assessment Report (AR5) produced by the Intergovernmental Panel on Climate Change (IPCC) has shown, climate change is expected to have widespread impacts on African societies, and Africans’ interaction with the natural environment. There are also signs that the impacts of climate change are already being felt, not only in terms of increases in temperature, but also in respect of agriculture (with lower crop yields) and the availability of water resources, among others. The links between climate change and the incidence of diseases -such as malaria- are also
becoming clearer.

The above state of affairs illustrates the need for a better understanding of how climate change affects African countries, and for the identification of processes, methods and tools which may help African nations to adapt. There is also a perceived need to showcase successful examples of how to cope with the social, economic and political problems posed by climate change in Africa.

It is against this background that the “SYMPOSIUM ON CLIMATE CHANGE ADAPTATION IN AFRICA” is being organised by Manchester Metropolitan University (UK), Addis Ababa University, the Research and Transfer Centre “Applications
of Life Sciences” of the Hamburg University of Applied Sciences (Germany) and the International Climate Change Information Programme (ICCIP), in collaboration with various agencies. The Symposium will be a truly interdisciplinary event, mobilising African and non-African scholars undertaking research and/or executing climate change projects in the African continent.

The “SYMPOSIUM ON CLIMATE CHANGE ADAPTATION IN AFRICA” will focus on “fostering African resilience and capacity to adapt”, meaning that it will serve the purpose of showcasing experiences from research, field projects and best practice in climate change adaptation in African countries, which may be useful or implemented in other countries in the continent.

One of the aims of the event will be to document and disseminate the wealth of experiences available today. To this purpose, the book “Climate Change Adaptation in Africa: fostering African resilience and capacity to adapt” will be published, with all accepted papers. This will be a further volume of the award-winning book series “Climate Change Management”, which since its creation in 2008 has become the world´s leading book series on climate change management. In addition, a set of papers selected by the coordination team will be published in a special issue of the International Journal of Climate Change Strategies and Management (a fully indexed journal, also at ISI /Thomson Reuters), under the title “Climate Change Adaptation
Practices in African Countries”.

The deadlines are as follows:

Since the conference book is expected to be launched shortly after the event, the deadlines need to be followed. Further details and a registration form can be seen at:
www.haw-hamburg.de/en/ftz-als/veranstaltungen/africa2016.html