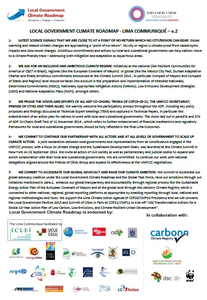 ICLEI’s carbonn Climate Registry provides data to the new portal to demonstrate the collective power of local action and to raise the level of global climate ambition.

On 11 December 2014 the Peruvian presidency of the UN Climate Change Conference (COP20) launched an online portal showing the actions that cities, companies, regions and investors are taking to address climate change.
The portal aims to demonstrate the strategic action being taken by non-state actors either individually or as part of cooperative initiatives. It displays thousands of climate action data, many of which have been supplied by ICLEI’s carbonn Climate Registry, the world’s leading reporting platform for local and subnational climate action. Other data have been gathered from reporting platforms, sustainability reports and individual commitments.

The launch of the NAZCA portal comes not long after the highly successful UN Climate Summit in New York in September, at which numerous climate action announcements were made by local and subnational governments – including cities, companies, regions and investors. The NAZCA portal will display all these actions together to give a clear sense of the sheer scale of global climate action that is now taking place.

Through demonstrating the sheer number of actions from these entities, the initiative will provide strong momentum to the UNFCCC climate talks and help give governments the confidence to sign an ambitious agreement at the Paris climate negotiations in 2015 (COP21).

Manuel Pulgar Vidal, President of the COP20 and the Peruvian Environment Minister, said today that he believed the new portal will trigger confidence and ambition.
“We are very pleased to be contributing this way of showcasing the impressive scale of action by cities, regions, companies and others in a way that will provide additional momentum and urgency into the process through to COP 21. Much of the ambition featured here will provide inspiration for what can be achieved, which is why we have named it NAZCA. The Nazca lines symbolize the creativity and the vision over 190 countries will need to finalize a strong 2015 agreement. These ancient lines hold significance for the peoples of this region but also the peoples of the world as we look to the past to inform the present and inspire a new and better future for humanity,” he said.

David Cadman, President of ICLEI, remarked: “Many actions featured on the portal are those that have been reported to the carbonn Climate Registry. They are therefore actions coming from the local and subnational level, whose leadership, ambition, and action are being celebrated in Peru. Now is the time to integrate all of these actions and ensure the full engagement and empowerment of local and subnational governments in Lima. It is time for all to be bold, ambitious and inclusive before we reach a point of no return”.

Developed with the support of the UN Framework Convention on Climate Change (UNFCCC), the portal links with the carbonn Climate Registry, which connects over 12% of the world’s urban population to local and subnational climate action. Early this week, the cCR welcomed its 500th reporting local government – Bristol, UK – further raising the tally to over 5,000 reported climate adaptation and mitigation actions, over 1,000 climate and energy commitments and 2.28 gigatonnes of GHG emissions. The cCR has also been designated as the central repository for local and subnational climate action of the recently launched Compact of Mayors. The Compact is the biggest collaboration among mayors and city officials to accelerate climate action.

This new link between the cCR and NAZCA also supports the agenda of the Local Government Climate Roadmap, a climate advocacy process led by ICLEI to promote the role and encourage the recognition of local and subnational governments in a post-2020 climate regime.

Christiana Figueres, Executive Secretary of the UNFCCC, said: “The NAZCA Climate Action portal is a great move forward in showcasing climate action and we congratulate the Peruvian Presidency in taking this step. The insight hosted here will provide inspiration for what can be done but it is not designed to be an exhaustive list of everything that is happening on climate change by non-state actors. More insight will be added throughout 2015 in the lead up to COP 21 as the momentum for an agreement in Paris builds throughout the year.”

Délio Malheiros, Vice Mayor of the City of Belo Horizonte, Brazil, noted: “The NAZCA platform and the carbonn Climate Registry both provide the evidence base that local leaders are urgently acting and actively collaborating to fight climate change. But we can do more. We can scale up actions and be even more ambitious. With due acknowledgment and more access to resources, we can ensure that the actions on these platforms are doubled, quadrupled and multiplied many times over.”

Susana Villarán, Mayor of Lima, Peru said: “The new online platform of Non-state Actor Zone for Climate Action is a good example of the new spirit of collaboration arising in Lima. Now, more than ever, we are committed to work together with all levels of governments to accelerate climate action. In return, we urge national governments to work with us, support us to ensure a successful Lima outcome, which will further dictate the success of the new international agreement to be adopted in Paris in 2015.”