Dr Didas Massaburi, Mayor of Dar es Salaam, Tanzania, appointed to the board of UCLG 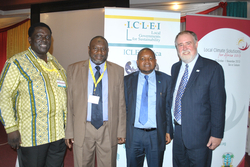 Mayor of Dar es Salaam, Tanzania, ICLEI Member and recent host of the Local Climate Solutions for Africa (LOCS 2013) Congress, Dr Didas Massaburi was appointed board member of United Cities and Local Governments (UCLG) at the end of last year.

UCLG, like ICLEI, represents and defends the interests of local governments on the world stage. In Dr Massaburi’s home continent of Africa, it is represented by United Cities and Local Governments of Africa (UCLGA) and has a Memorandum of Understanding with ICLEI Africa, both organisations sharing similar beliefs and goals.

The appointment is of special significance, as Dar es Salaam City Council was the host of the recent Local Climate Solutions for Africa (LOCS 2013) Congress, a huge success that saw the adoption of the Dar es Salaam Communiqué by African Mayors and Subnational Leaders, as well as the mass signing of the Mexico City pact and Durban Adaptation Charter. See here for more information.

UCLG-A was a key participant and endorsing partner of the event, and Dr Massaburi’s three year appointment to the UCLG board is highly appropriate, as the mandate up until 2016 will lead up to Habitat III (UN Conference on Housing and Sustainable Urban Development) and the defining of the relevant Sustainable Development Goals. We congratulate him and offer our sincere and strong wishes for success.

In addition to his role as Mayor of Dar es Salaam City, Dr Massaburi is Chairman of the Association of Local Authorities of Tanzania (ALAT). He has a regional role too, as the Governing Council of the East African Local Government Association (EALGA) recently re-elected him as its Vice-Chairman.