Exciting Progress Made with Urban-LEDS cities in South Africa 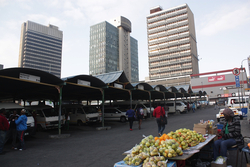 The first output lays the foundation for measuring the impacts of the numerous strides the Metro is taking towards a low-carbon future. Urban-LEDS staff compiled the Greenhouse Gas inventory for 2012, building on the experience of similar recent undertakings for KwaDukuza and Steve Tshwete (these two inventories have also been updated to reflect emergent best practice in compiling inventories).

Nelson Mandela Bay’s greenhouse gas inventory was subject to a rigorous review by Urban-LEDS project partner, Sustainable Energy Africa, and was compiled using data provided by the municipality, Eskom, StatsSA, Department of Energy, and others.

The inventory is useful as both an educational and a planning tool, as it can be used by the municipality to set targets for energy efficiency improvements, and carbon reductions, while identifying the sectors where the greatest energy savings and carbon emissions reductions are possible. The high-level results show that the municipality emitted 5.2 million tonnes of carbon dioxide equivalent in 2012, 73.3% of these emissions arising from the consumption of electricity in the municipality.

Nearly 50% of the total energy consumed in the municipality is for transportation, while industrial sector contributes to 36% of the total emissions. The per capita footprint is 4.5 tonnes of carbon dioxide equivalent per person, which is broadly consistent with the figures for municipalities in South Africa with similar economic activities. More details of the inventory and resultant recommendations can be found here.

Paving the way for further emissions reductions is the bold leadership of the Municipality in creating favourable conditions for small-scale embedded generation in South Africa. A Case Study was commissioned as a joint venture of ICLEI, GIZ and SALGA, and carried out by Africoast Engineers SA.

Embedded generation is the generation of electricity by residents, businesses or industries who can supply electricity to the grid via grid-connected devices (solar is the most common source, but wind and bio-gas are also viable options) and a net-metering system.

According to the Case Study released this week, the Municipality has opted to focus on the contribution that small-scale embedded generation can make towards achieving key constitutional mandates such as economic growth and development, sustainable service delivery, and ensuring a safe and healthy environment. A number of useful lessons can be learned from the Municipality’s experience, and other cities and towns can adopt a similar model, and further develop best practice in this arena. To date, 27 licensed embedded generation systems have been connected to the municipal grid. The efforts of the municipality demonstrate a commitment to making the most of South Africa’s abundant renewable sources of energy, and to a low emission development path. The case study will be disseminated through the South African Urban Energy Support Network.