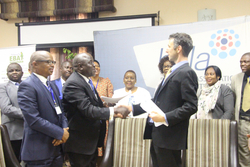 The Botswana Association of Local Authorities (BALA), an ICLEI member and partner since 2010, has signed a Memorandum of Understanding with ICLEI Africa. This took place in the opening session of the BALA Annual Conference 2017 held in Maun in August. The MoU promises to begin a new era of cooperation between the Africa Secretariat of ICLEI – Local Governments for Sustainability, and the national coordinator and forum of Botswana’s councils and local government leaders.

ICLEI and BALA have a long history of working together. As a national local government association, BALA dates back to 1983 when it was established as a vehicle to drive the promotion of unity, solidarity and cooperation among Botswana’s local authorities. ICLEI’s work in Botswana has long had an emphasis on integrated water resources management, from early initiatives such as LOGO Water, to more recent projects such as SURe 4 Water, and BALA’s strong participation in the 2017 Local Climate Solutions Congress (LoCS 4 Africa) which had the theme of Water and Climate. BALA formally became an ICLEI member in 2010.

The need for an MoU to solidify and broaden the working relations between ICLEI and BALA had long been recognised. Both parties finally came together to draft the document in June 2017, in the city of Gaborone. It was also decided that an apt setting for the signing would be the 2017 BALA National Conference.

The BALA National Conference 2017 took place in Maun, in the North West District of Botswana, from 21-23 August. It brought together representatives of all the District and Town Councils of the country, traditional leadership and the National Ministry of Local Government. The Assistant Minister of Local Government and the BALA President Rev. Mmachakga Mpho Moraukgomo formally opened the event.

The theme of the Conference was Thinking Globally, Acting Locally: Energising Local Economies for Sustainable Development, a highly appropriate theme for the situation in which all local governments find themselves in the early 21st century. The theme was also fitting as a backdrop for formalising the working relationship between BALA and ICLEI, the world’s largest and oldest network of cities and local governments for sustainability.

In the opening session of the first day, ICLEI representative, Steven Molteno, was joined by Rev. Mpho Moraukgomo in extending an invitation to all local authorities present to join the ICLEI network, in line with the theme of the Conference and the interests of locally driven sustainable development. Speakers on behalf of both BALA and ICLEI underlined the crucial role of local authorities as the foundation of all government. Being closest to the constituents and immediately accountable to the people means that they are there to see the challenges on the ground as they arise. Local leaders are also on the spot to create and implement the solutions which are most applicable to an area’s specific conditions. All of this positions them at the vanguard of change – in an era when change is accelerating at a dizzying pace.

The ICLEI address was immediately followed by the MoU signing ceremony.

The MoU reaffirms both sides’ interest in working together – particularly on the joint creation, pursuit and implementation of sustainable development initiatives in Botswana. Both parties commit to align and coordinate their efforts, in the interests of maximising the benefit to Botswana local governments and the greater cause of building local sustainability.

We are honoured to join hands with BALA at this critical stage in our continent’s development, and we look forward to a long and productive future working together!