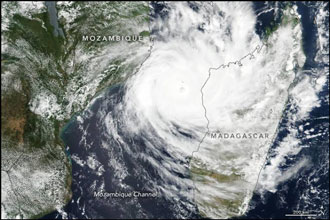 Today, as cities and towns in Mozambique, Zimbabwe and Malawi, are still reeling from the effects of Cyclone Idai, ICLEI Africa launched an initiative which mobilises existing and new resources to provide tangible long-term support to build the resilience of those cities and towns most affected by the devastation left behind by the cyclone.

ICLEI Africa’s Fortitude Initiative moves beyond rhetoric, to mobilise financial, human and technological solutions on the ground in cities and towns across Africa, who are most affected by extreme weather events, such as Cyclone Idai. These actions will build on existing resilience related work being done by ICLEI Africa within these areas. It will further support cities and towns in Mozambique, Zimbabwe and Malawi, to build back better post Cyclone Idai, implement innovative solutions that improve response to disasters in the future, while working towards the achievement of Agenda 2063: The Africa We Want.

The intensity of Cyclone Idai – with wind speeds up to 170 km/h being reported in Beira – may well be indicative of the new normal, where cyclones are more intense and frequent, exacerbated by climate change.

“We believe that this disaster calls us to enact a significant step-change in how we act in relation to sustainability on the Continent,” says Ms. Kobie Brand, Regional Director, ICLEI Africa. “What is occurring in Mozambique, Zimbabwe and Malawi, goes beyond climate change, and speaks to the paramount importance of transforming the systems that perpetuate the vulnerability of our fast-growing urban and surrounding communities in Africa.”

Through the ICLEI Africa Fortitude Initiative, we will work with national and subnational governments and their associations, development partners, banks, the private sector and the donor community, across the African continent and internationally, to mobilise resources that will flow directly to cities and towns and result in tangible local actions. These actions will be based directly on locally defined needs, with a focus on post-disaster action and building back better.

ICLEI Africa has recently joined the UCLG Africa Climate Task Force as Technical Lead. The Task Force aims to coordinate climate action in favour of local governments on the African continent, and it is hoped the Fortitude Initiative will be further strengthened through this partnership.

“The successive occurrence of extreme climate events affecting Mozambique clearly shows the degree of vulnerability of our country and the urgent need to think about building long-term urban resilience,” says Dr. Calisto Moisés Cossa, President, Associação Nacional dos Municípios de Moçambique (ANAMM). “We need to urgently consider new approaches to land-use management and a new vision for the reconstruction and management of our cities in the long-term, with special attention to sensitive and vulnerable areas, so that they are resilient, safe and inclusive. It is necessary to build partnerships to strengthen adaptation to climate change in order to reduce disaster risk. Synergies need to be established to accelerate the achievement of the sustainable development goals in the coming years in Mozambique.”

Immediate steps that are being taken include:

We are hereby inviting our entire ICLEI community of network cities and partners, as well as other interested organisations, governments and institutions to contact ICLEI Africa at fortitude.africa@iclei.org to explore ways in which we can multiply and coordinate our efforts in support of the cities, towns and communities so severely affected by Cyclone Idai. We look forward to working with all willing partners in ensuring an efficient, rapid and resilient rebuild effort in the weeks, months and years ahead.

“Our strong cooperation with ICLEI has taken on a new urgency, following the tragic losses caused by Cylone Idai. We will continue to work with ICLEI Africa, to support local action to reduce risk and disaster losses. Sustainable development in southern Africa has suffered a terrible reverse over these last two weeks. We need to do all in our power to support adaptation to climate change and to build back resilient infrastructure to a standard required to face the new reality of extreme weather events,” says Mr. Amjad Abbashar, Regional Director, UN Office for Disaster Risk Reduction Regional Office for Africa.

ICLEI Africa salutes and expresses our deepest gratitude to the United Nations, the SADC region and the many disaster relief and health NGOs and other organisations who are making disaster relief donations and operating tirelessly on the ground to support the millions of affected people in the aftermath of the cyclone. We know these actors are each bringing much needed immediate support to the affected communities.

“To ICLEI’s many member cities and other local and subnational governments in the affected areas, we stand with you in the wake of this unprecedented disaster in Africa and are committed to walk this journey with you, each step of the way,” said Mr. Gino van Begin, Secretary General of ICLEI, in launching the new Fortitude Initiative.

“We, as Mayors of cities affected by Cyclone Idai, have seen the critical need for long-term resilience, to build safer African cities for the future. As clean-up operations are ongoing, we know that rebuilding will be a longer term journey. We therefore want to thank ICLEI for beginning the new Fortitude Initiative, and for sharing our belief that cities can and should be at the forefront of building long-term resilience,” says Mayor Manuel de Araújo, Quelimane, Mozambique

For more information and updates on the ICLEI Africa Fortitude Initiative and to join hands in delivering longer term climate resilience, urban planning and rebuild support to the many affected local and subnational governments, please email fortitude.africa@iclei.org and follow us on Twitter @ICLEIAfrica. For more on our work, please visit africa.iclei.org.

The Costs of Cyclone Idai