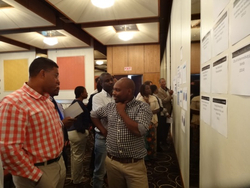 The relationship between ICLEI Africa and City of Johannesburg continues to strengthen, with ICLEI Africa’s climate change team recently facilitating a one day session to take stock and review their entry to the Earth Hour City Challenge competition in 2014 – 2015.

Johannesburg was one of the South African national finalists of the 2014 – 2015 Earth Hour City Challenge competition. The competition is run jointly by WWF and ICLEI whereby cities report their actions and commitments to the carbon Climate Registry – a global climate action database run by ICLEI. As part of this year’s offering to participating cities, ICLEI Africa facilitated a lively one day workshop. Representatives from municipal departments such as transport, municipal fleet and planning, as well as city entities such as Pick-it-up, took part.

The intention of the workshop was multiple. Firstly, to share between departments the status of the City’s climate change journey to date; updating departments on progress in embedding climate change into the long-term Growth & Development Strategy, as well as in GHG measurement and management. This year, Johannesburg reported its GHG inventory (performance), as well as 17 actions to the Registry. Lots therefore to reflect on! 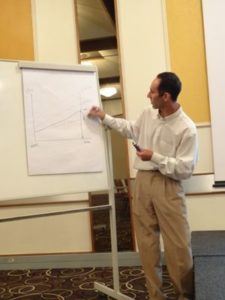 Secondly, the workshop sought to reflect on opportunities for climate change to be further embedded in departmental plans and policies. The process of setting departmental targets for carbon emission reductions was discussed. This discussion enabled the discovery of a number of actions that are taking place in different departments but that were not captured in this year’s entry. The workshop helped to fill in the gaps and potentially strengthen Johannesburg’s entry to future competitions.

By capturing additional actions and discussing the importance of measurement and management, the one day workshop was the perfect introduction to a week-long set of activities for city staff on climate change. ICLEI Africa is looking forward to working closely with the City to further embed and institutionalise a climate response throughout the Metro.

To learn more about ICLEI Africa’s low carbon team and how they can help you to institutionalise low-carbon development in your organisation, or facilitate your event, click here