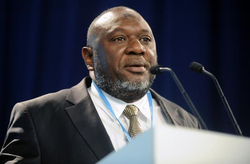 ICLEI and some key partners participated at the Cities Forum as part of the United Nations Framework for Climate Change Convention (UNFCCC) SB 40 session on June 10, 2014.

Conducted under the Ad Hoc Working Group on the Durban Platform for Enhanced Action (ADP) agenda, the forum provided the platform for cities and subnational authorities to share experiences and best practices in adaptation and mitigation.

Dr. Aisa Kirabo Kacyira, Deputy Executive Director of UN-Habitat, chaired the three-part forum. The first round of keynote interventions saw Vanessa Castan Broto highlight the potential for knowledge co-production that public participation entails, drawing from their Public Private People Partnerships for Climate Compatible Development (4PCCD) project in Maputo. Following this was a panel discussion where Eng. Mussa Natty of Kinondoni Municipal Council shared the climate initiatives that they are undertaking for mitigation, adaptation, as well as advocacy. Some of the activities he cited are those in partnership with ICLEI Africa, such as interventions that form part of the Nexus project, hosting the Local Climate Solutions for Africa, and being a signatory to the Durban Adaptation Charter. While Dar es Salaam’s experience stands to show initiatives that cities from the developing world are taking, these have also highlighted challenges cities from the global South face in implementation, such as institutional capacity and access to finance.

The floor was then opened for an open discussion from the floor, which includes representatives from different sectors and levels of governance. Africa was well represented with Senegal, Tanzania, and Uganda making interventions on the reality of different institutional set-ups and implementing in developing countries. Richard Muyungi, lead climate negotiator of Tanzania, specifically called on national governments to work with cities in order to unleash the potential that would enable a more sustainable development trajectory.

Parallel to this occasion within the conference is South Africa joining the Friends of the Cities group. Debra Roberts, of the South African delegation to SB40 had this to say:

“South Africa acknowledges the critical importance of local action and the strategic climate protection opportunities offered by cities with a high adaptive capacity and a low carbon development path. The Friends of the Cities initiative will help ensure that these opportunities are recognized and activated through a forward looking and bold 2015 global agreement.”

Suffice to say SB40 has served a great platform for African voice in advancing recognition for local climate initiatives at the international level. We would then like to thank our members for their continued support in the process, without which this progress would not have been made!