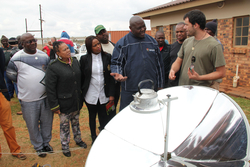 Mayor Mike Masina of ICLEI Member Steve Tshwete Local Municipality (Middelburg) in Mpumalanga is quite clear that his municipality has benefited greatly from its involvement in the Urban-LEDS project during the past two years. “They’ve opened our eyes. ICLEI – Africa have shown us that this idea of moving to a low-emission, green economy isn’t just a fairy tale – it’s doable.”

Mayor Masina has been involved in local government in Middelburg since the 1990’s and became Chief Whip in 2002, then Executive Mayor in 2011. He is justifiably proud of Steve Tshwete Local Municipality (STLM)’s performance, as it has received a long string of unqualified audits and is highly regarded in government circles. He puts this down to good principles of governance adopted by all parties early on in the transition years of the early 1990’s, but many locals would add that his own quiet leadership style has maintained and built upon that culture of care and stability.

His vision was always of creating a reliable governance platform for community-driven economic development and, in turn, long-term social benefits for STLM. The arrival of ICLEI -Africa’s experts helped him and his executive team to understand the risks of continued carbon-intensive economic activity and the significant economic opportunities awaiting any municipality that pioneered a low-carbon pathway. “We want to chart a route to a green economy here because we realise this is the future; any planning that ignores sustainable development will not work long-term.”

The excitement in Mayor Masina’s voice when he talks of the projects under way within the Urban-LEDS project is palpable. “Our Greenhouse Gas Inventory is complete. The installation of a number of solar units for the Doornkop community is underway. We’re motivated!”

But he comes back repeatedly to this central point: “Finding that pathway to a green, more resilient local economy is only possible if we maintain our discipline in the way we manage the basics here at the municipality. That means strong, consultative financial management, proper budgeting, good performance management of all staff and excellent relationships with the local business community. With these all going in the right direction I believe we will find enough wiling partners and enough finance to help us realise our vision. Our friends from ICLEI – Africa have convinced me we have a brighter future here. And we’re learning, learning as we go.”

See what material Mayor Masina has taken to COP-21 to promote his municipality – a brochure and one page invitation to collaborate with Steve Tshwete Municipality.