Kaohsiung City becomes the latest signatory to the Durban Commitment! 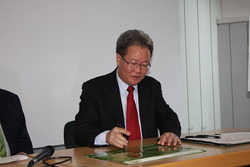 At the 2015 Resilient Cities Congress, which forms part of a series of annual global forums, which focus on urban resilience and adaptation, the Deputy Mayor, on behalf of the Mayor of Kaohsiung City, signed the Durban Commitment: Local Governments for Biodiversity.

Kaohsiung City has recently developed their Local Biodiversity Strategy and Action Plan and the signing of the Durban Commitment shows the City’s commitment to implementing tangible, on-the-ground solutions for the achievement of biodiversity conservation and management for the benefit of its citizens.

Biodiversity is without doubt an important index to value one country’s level of sustainability. What we have done so far would be absolutely regarded as the backbone for our city to pursue sustainable development.

In public engineering, environmental protection, agricultural development and so on, the importance of maintaining biodiversity is of utmost importance which could not be ignored by the city government. This principle has been obeyed in the past, and it will be further followed in the future.”