At a champagne breakfast at the 12th Conference of the Parties to the Convention of Biological Diversity, ICLEI – Local Governments for Sustainability (led by ICLEI Africa in partnership with the ICLEI Cities Biodiversity Center), together with project partners SwedBio, the Stockholm Resilience Centre, the South African Biodiversity Institute (SANBI), the Global Biodiversity Information Facility (GBIF), and the African Center for Cities, proudly launched Urban Natural Assets for Africa- a cutting edge program to support the local implementation of the Aichi Biodiversity Targets to conserve and protect nature in cities in sub-Saharan Africa as a project under the Urban Biosphere Initiative (URBIS).

Through generous funding from the Swedish International Development Cooperation Agency (Sida) through SwedBio at Stockholm Resilience Centre, this project will support knowledge exchange between important actors in cities across the African continent, through capacity development with regards to biodiversity and ecosystem services.

Maria Schultz and Ellika Hermansson Torok of SwedBio at the Stockholm resilience Center, funding and implementing partners of the UNA Africa Initiative.

This capacity building will be based on a thorough needs-assessment conducted in each of the participating cities. The aim of this capacity building programme will be to contribute to meeting the objectives of sustainable use of regional biodiversity and ecosystem services, and to improved human well-being, poverty alleviation and strengthened resilience amongst the urban poor. 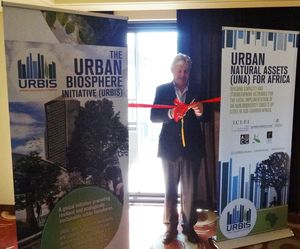 Professor Thomas Elmqvist took up the golden scissors and cut the red ribbon, marking the official launch of the UNA Africa initiative.

Councillor van de Merwe of the City of Cape Town stated: “As a City blessed with a wealth of urban natural assets, we are delighted to be a part of this important programme in conjunction with three other influential African cities. We look forward to sharing with our colleagues in these cities, and yourselves, some of the opportunities and challenges in managing these assets in a sustainable manner, so as to ensure significant benefits to all citizens and visitors alike, now and long into the future. In particular, we would like to introduce our “Source to Sea” river corridor initiative into UNA, to exchange ideas around maximising ecological, recreational, educational, scientific and quality of life opportunities linked to restoring and enhancing important water courses through our urban area.” 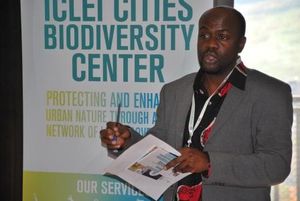 Hussein Omar, urban planner and representative of the City of Dar es Salaam speaking at the launch event.

Hussein Omar, an Urban Planner representing the City of Dar es Salaam at the event, highlighted that: “Dar es Salaam holds a wealth of biodiversity and it’s something I am very proud of. Oftentimes we work in silos which can be very frustrating and a waste of resources when common objectives may be able to be achieved if we instead, worked together. If this project can help us to get our city’s departments on the same wavelength- mainstreaming nature in all our work, we can certainly achieve great things for biodiversity in the city!” 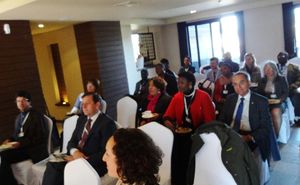 In addition, David Maddox, Founder of the Nature of Cities launched the 2015 URBIS Webinar Series. This series will be an exciting URBIS platform for dialogue, held at monthly intervals which will bring together local governments and leading experts in pertinent fields to share experiences, address specific urban challenges, consider new developments, explore collaborative opportunities and strategise on ways forward, with a special focus on city-regions. These events will be facilitated in a highly interactive and participatory manner, conducive to constructive discourse and candid debate. The 2015 URBIS Dialogues will address exciting topics and themes within the urban biodiversity realm, and will contribute towards the establishment of criteria for the URBIS Cities of Distinction Award process. Notifications around the first dialogue will be shared soon. 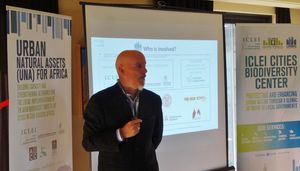 ICLEI and its partners are thrilled to announce the launch of these URBIS initiatives, which should spur great progress towards implementing the Aichi Targets at the subnational and local level, in Africa through the UNA Project and beyond.