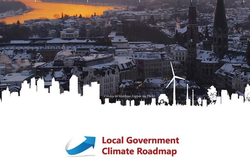 Local and subnational governments are seeking to provide impetus to the ongoing UN Bonn Climate Change Conference by demonstrating their climate leadership and ambition.

Ahead of these negotiations, the Local Government Climate Roadmap released a 10-point action plan to raise climate ambition, calling on negotiators to:

In particular, local and subnational governments are asking negotiators to incorporate a specific text into the agreement to be reached at the COP21 in Paris later this year.

In the suggested text, Parties are encouraged to commit to “enhance action through the cooperative implementation of the policy options and further incentivize climate actions by subnational authorities, including local governments, such as establishing effective regulatory and institutional frameworks and financing mechanisms needed to address barriers and leverage investment, in accordance with their national circumstances.”

The proposal is based on previous texts in the ADP negotiations and the language contained in para19.f of the Sendai Framework on Disaster Risk Reduction adopted in March 2015.

Other proposals include the adoption of a 10-Year action plan under the UNFCCC, similar to the 2010 Nagoya Plan of Action at the Convention on Biodiversity, as well as active engagement, in particular in the preparation of Intended Nationally Determined Contributions (INDCs).

Yunus Arikan, Head of ICLEI’s Global Policy and Advocacy, remarked: “A dedicated paragraph is essential to to ensure a global transformation to a low-carbon, climate-resilient age in the urban world. Such a paragraph can help nations to work collectively in a framework and through a portfolio of options for the mobilization of appropriate incentives and innovative governance models to tap the potential of local and subnational action, with strong engagement of their local and subnational governments as governmental stakeholders. Such a formulation and outcome can Close-the-Loop in the climate regime and Connect-the-Dots with the Post2015 Development Agenda and HABITAT-III Process. ”

As an accredited organization to the UNFCCC, ICLEI is organizing its side event on 3 June Wednesday at 15:00, hosting an exhibit in the first week at the conference venue, and convening a high-level dinner hosted by Mayor Jürgen Nimptsch of Bonn, on Monday 8 June at the Bonn Town Hall. The Resilient Cities Congress taking place on 8-10 June in Bonn will also offer free access to UNFCCC Conference delegations.

In its capacity as the focal point of Local Governments and Municipal Authorities Constituency (LGMA) to the UNFCCC and facilitator of the Local Government Climate Roadmap, ICLEI is facilitating inputs to the UNFCCC negotiations, ensuring the flow of information with the UNFCCC Secretariat and convening dialogues with Friends of Cities and other Parties in the negotiations. ICLEI also helps cities and regions to engage in the Lima-Paris Action Agenda led by France, Peru, the UNFCCC Secretariat and the UN Secretary General’s Office. Specific meetings are also organized within the scope of the Compact of Mayors, World Summit Climate and Territories in Lyon on 1-2 July and the Durban Adaptation Charter.

ICLEI will also present an update on the progress of local and subnational action globally through reporting at the carbonn Climate Registry, and will advance with the preparations of the Transformative Actions Programme (TAP) and the TAP Pavilion, which will feature at the COP21 in Paris.

Finally, ICLEI is supporting the work of the UNFCCC Secretariat, pursuant to its role as a lead international organization at the ADP Technical Examination Process on Urban Environment.

Within this scope, ICLEI supports the Visibility Campaign of the UNFCCC Climate Action Fair, which highlights inspiring examples of commitments by cities and regions around the world – including Bonn, New York City, Copenhagen, Seoul, Bogor, Bristol, Paris, Belo Horizonte, Vancouver, Oriental Region of Morocco, South Australia, Quebec – based on the information they have reported on the carbonn Climate Registry and NAZCA Platform.

Most of these cities have shown leadership by expressing their intent to comply with the Compact of Mayors, a global coalition of Mayors and city officials working to address climate change. Kgosientso Ramokgopa, Mayor of Tshwane – WWF Earth Hour City Challenge South Africa National Capital 2015 – and Mayor of Bonn Jürgen Nimptsch will also join the High Level Dialogue on Thursday 4 June.

At the ADP Technical Expert Meeting on Energy Efficiency in Urban Environments to be held on 5-6 June, ICLEI is delivering keynote presentations and facilitating the participation of representatives of Rajkot, Recife, Bogor (model cities of the Urban-LEDS Project), Paris (host city of COP21), Tshwane, and the Government of Catalunya (member of ICLEI, nrg4sd and Climate Alliance).

ICLEI and representatives of local and subnational governments have been actively engaged in the ADP Process since 2012. Details are covered in the ADP Section of the Local Government Climate Roadmap Homepage.

Arikan is optimistic that negotiators can progress towards an ambitious and inclusive climate agreement. He explained: “Lima united countries and Paris must engage all actors. Paris2015 is the last chance for nations to strengthen the trust and engagement of the people in the intergovernmental process.”