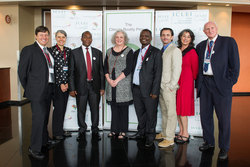 The first Southern African Regional Workshop closed with local governments renewing their commitments creating a more sustainable future and encouraging others to do the same.

With the close of the first Southern Africa Regional Workshop on implementation of the Durban Adaptation Charter, local governments in attendance renewed their commitments to implementing action towards building resilience to climate change and are inviting local governments from across the globe to follow suit.

Evidence from climate research indicates that no continent will be struck as severely by the impacts of climate change as Africa. Given its geographical position, the continent will be particularly vulnerable due to the considerably limited adaptive capacity, exacerbated by widespread poverty and the existing low levels of development. This has positioned Africa at the heart of the climate challenge and one of the key messages from the workshop was the clarion call to action from the local level.

Mario Molina, Director of the Climate Reality Leadership Corps summed up the call in three statements:

– We must change
– We can change and posed the question
– Will we change?

The answer to the question for local governments and the world at large is still pending although local governments have the Will of the people to change. Kobie Brand, Regional Director for ICLEI Africa reiterated the importance of the Durban Adaptation Charter as a global change instrument being championed by mayors and local government leadership in Africa to promote local climate resilience in Africa.

Noted during the workshop was the importance of institutional preparedness although at times, unclear institutional structures could be a hindrance in working towards building resilient communities. Vhalinavho Kavhagali, Director Climate Change, Department of Environmental Affairs South Africa emphasised the need for a coordinated planning across the different spheres of government and in particular the role of local governments in contributing to realisation of plans as set out in the country’s national development plans. He indicated the Durban Adaptation Charter as a platform to unlock implementation and planning process from the local level upwards towards a more resilient and low carbon economy future in Africa.

Included in the workshop programme was a site visit to either the Mariannhill Landfill Site or Buffelsdraai Landfill Site Community Reforestation Project. The Mariannhill Landfill site is a recipient of global awards of excellence that address various aspects of the landfill operations including waste to energy, recycling ecological restoration, long term planning horizons, community involvement and small business development. The Buffelsdraai Landfill site is also a recipient of various international awards inclusding a Gold Standard for ensuring exceptional climate change adaptation benefits and for the benefit to local communities.

Tiyende, a Nyanja word meaning “let’s go together” was adopted as the underlying word to guide discussions throughout the workshop. The word resonated with the dialogue as most speakers highlighted local governments as facing a common challenge and therefore had to seek and share solutions together.

Key quotes from the workshop

“If we get scared into inaction, and lose hope sitting at home depressed, then none of these policy and technology responses will be implemented. It’s about trusting the human spirit”. (Mario Molina, Climate Reality Project)

“Number of important climate conferences in 2015 and 2016 that will be setting the agenda for the next 20 years, the voice of local governments especially from Africa has to heard to contribute to a favourable outcome”. Cllr James Nxumalo, Mayor of eThekwini Municipality

As part of the Incremental adaptation, transgressive and transformative change towards building resilience, “Beliefs, values and well-being are important. Well-being is going to become an important layer in the complex situation of adapting to climate change”. Prof Coleen Vogel

“In our small town, I am jack of all trades, the general practitioner. David Uushona, Walvis Bay Municipality, Namibia