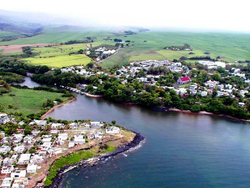 Savanne District Council, in the south of the Mauritius, is one of the most scenic and unspoiled parts of the island nation.

Savanne District is located in the far south of the island nation of Mauritius. It has an estimated population of just over 70,000 and covers an area of 244.8 km2.

The District is centred on the town of Souillac, where the state facilities are located, such as the District Court, as well as the local electricity, transport and water authorities. The area’s primary economy has traditionally been agriculture (specifically sugarcane) with small and medium enterprises.

However its remarkably beautiful coastline has led to recent developments in the tourism industry, with hotels, guest houses, restaurants and other facilities being built – together with the development of Integrated Resort Schemes (IRS) in the area. Aside from the coastline, a range of attractions have helped to build Savanne’s reputation for beauty – from magnificent cliffs and waterfalls to volcanic features (the famous “coloured earth”) and even a centre of pilgrimage, Grand Bassin (known as Ganga Talao).

Savanne District is a recent creation, coming about as a result of the 2011 Local Government Act, when the Grand Port Savanne District was split up. For such a young local government, it has been remarkably active. It has immediately begun work on its recycling – committing to the sorting of refuse – and is currently working on sourcing funding for specific bins to be placed in the necessary public places throughout the district. The Government is also directed towards free education and health care. It became an ICLEI Member at the beginning of 2014, and has participated in the LOCS 2013 Congress in Dar es Salaam. The Council’s motto, “Service with Integrity” is well chosen we believe. We would like to recognise this active new Local Government and to profile it as our Member of the Month for April 2014.