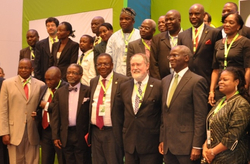 Lagos State, the megacity ICLEI Member in southern Nigeria, has consistently led the way in a range of sustainability activities – from solar power in public institutions to innovative adaptation measures – it well deserves this member of the month recognition.

Megacity Lagos State, the largest urban area in Africa and the economic powerhouse of West Africa, comprises 20 Local Government Areas and 37 Local Council Development Areas, all of which come together as 5 principle administrative divisions under the State Government. Under the dynamic leadership of its Governor, His Excellency Babatunde Raji Fashola, the state has long been undergoing a radical transformation. The wide range of projects, completed or still underway, includes greening and city beautification schemes. Probably the most famous is “Eko Atlantic City”, the enormous development adjacent to Victoria Island which will house 400,000 residents and is designed with the intention of stopping the erosion of the Lagos coastline.

The relationship between the ICLEI Africa Secretariat and Lagos State Government had been developing for a considerable time. In September 2011, the very successful African Mayoral Climate Change Declaration – West African pre-COP17 Congress was hosted by the Governor of Lagos, with the expert help of the Lagos State Ministry of Environment, and in partnership with ICLEI Africa. The highlight of this event was the signing of the “African Mayors Climate Change Declaration”, led by His Excellency the Governor. This was supported by the Lagos Declaration and called for due recognition of the role of local governments in international climate change debate and implementation. The outcomes of this Congress fed into the recent Durban Local Government Convention, strategically timed to take place during the UNFCCC COP17/CMP7 in Durban, South Africa. Here too, the representatives of Lagos State were actively involved in pushing the process forward, and were instrumental in the drafting and signing of the Durban Adaptation Charter.

Since then, a wide range of initiatives have been embarked upon. The Lagos Bus Rapid Transit System, also known as Lagos BRT, has been developed and rolled out to combat traffic congestion and pollution. Along with reducing traffic congestion and improving air quality by taking individual automobiles off the road with an efficient and affordable public transit system, the BRT is meant to provide mobility and serve the less privileged and poor masses of a densely populated Lagos. Recently, the Governor inaugurated the new Lagos State Water Regulatory Commission. The Commission is charged with raising awareness of the importance of conserving and caring for the state’s water resources. ICLEI member Lagos State is home to large estuaries and other water reserves, and has made sustainability a core principle of its development. Then in March 2014, the 6th Lagos Climate Change Summit was held (18 – 20 March) on Victoria Island in the center of Lagos. ICLEI joined over 700 delegates, assembled from across Africa and the wider world, comprising Political and Technical leaders in National, State and Local Governments, traditional rulers, academics, climate change scientists and experts, as well as representatives of the private sector and non-governmental organisations (NGOs). ICLEI President, Mr David Cadman, presented the lead paper, entitled “Exploring Innovative Opportunities and Smart Solutions in Climate Change” with a focus on building sustainable green resilient cities. This was followed, later in 2014, by World Environment Day (5 June), where the Governor placed special emphasis on the effects of sea-level rise and the experience that his coastal State shared with the world’s Island Developing States.

The State Government and the UK Department for International Development (DFID) is now set to bring solar power to 172 Public Schools and 11 Public HealthCare Centers (PHCs) across the state. Most of these institutions are in underprivileged and underserved areas that often are not on the energy grid, and the aim is to provide them with sustainable renewable energy solutions in the form of clean, reliable energy services. The immense project was begun on 7 January.

Altogether, the scheme will bring uninterrupted sustainable power services to 67% of the State’s isolated or disadvantaged schools. Previously, many of the schools and health centers had been using petrol or diesel generators for their power, or had been operating without any access to power. This project however, will cut these costs, bring renewable energy to these institutions, create sustainable employment opportunities and improve the living standards of students, patients and employees.

Altogether, we feel this exceedingly active ICLEI Member deserves all the recognition we can give it, and we are proud to declare it our member of the month (not for the first time) and wish it well in the coming year.