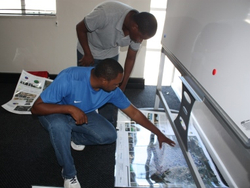 Nelson Mandela Bay (NMBM) is one of eight Metropolitan Municipalities in South Africa and as a growing metro has to deal with the usual teething pains of backlogs in service delivery and a growing informal settlement.

As one of the key activities, representatives from the municipality’s key departments recently attended a workshop on the project. The workshop served as a platform for ICLEI Africa to report back on the climate analysis and vulnerability assessments that were carried out for the water and sanitation infrastructure and services for the municipality. There was an in-depth focus on the assessment for Ward 20, Veeplaas. These assessments were carried out in 2014.

The municipality also received training on the use of the ResilientAfrica Online tool. This tool was designed by local governments in Africa for use by local governments in Africa in identifying locally appropriate adaptation options to consider when planning for the future. The highly interactive tool “walks” local governments through a process of identifying, prioritising and assessing viable adaptation options that should be included in strategic plans towards building resilience to climate change in the 21 Century. This comprehensive tool enables cities to also formulate local action plans to support in the process. In this project, these local action plans will be referred to as the SURe Water Frameworks.

Day 3 of the workshop was set aside for community engagement. Participants were from Veeplaas, KwaMagxhaki and Kwazakele, 3 of the several communities within the metro. Community members actively participated in the workshop. Through the facilitated discussions, community members managed to propose adaptation options that they are keen to have the city consider in preparing the Local Plan of Action or SURe Water Frameworks that will emerge as one of the main outputs for the project.

SURe Water 4 Africa Developing LoCS project is targeting local authorities in 6 countries in southern Africa namely Botswana, Malawi, Namibia, South Africa, Zimbabwe and Zambia. It was initiated in December 2012 and is set to conclude in June 2017. The project is received funding from the European Commission.