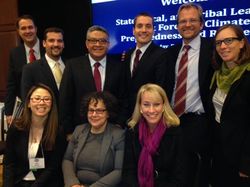 Members of President Obama’s State, Local and Tribal Leaders Task Force on Climate Preparedness and Resilience convened earlier today in Des Moines, IA, where they received a report of federal policy recommendations from a network of 170+ mayors and local officials.

The report calls for modernizing federal emergency management and infrastructure programs to help communities better prepare for extreme weather and other climate change impacts. The findings were shared by the Resilient Communities for America Campaign – a nationwide effort led by local elected officials. The effort combined both survey and workshop feedback from local leaders in the ICLEI USA and National League of Cities (NLC) networks as well as signatories of the Resilient Communities for America Campaign.

“Strengthening community resiliency is key is addressing the long term effects of climate change. As local leaders, we need to step up and take charge of climate preparedness efforts in our own communities,” said Resilient Communities for America Campaign Chair and Mayor of Sacramento Kevin Johnson. “The Resilient Communities for America Campaign is mobilizing those efforts through a national movement of local climate leadership, and this report reflects our most recent efforts to better coordinate federal-local emergency management.”

The report comes on the heels of last week’s release of the National Climate Assessment, which offers the most comprehensive analysis to date of how climate change is impacting the nation. Prepared by a group of federal agencies, the Assessment also describes opportunities to slow and prepare for climate change and highlights the leadership of cities and counties on the issue.

“Communities are on the front lines of the climate issue, experiencing the impacts and implementing the solutions. We are very encouraged by the engagement from the Obama Administration and want to see more from the federal level, because local governments can’t do it alone and our communities can’t wait any longer,” said Brian Holland, a Lead Author on the National Climate Assessment and the Director of Climate Programs for ICLEI USA.

One of the main reforms featured in the report is to encourage innovation in how federal emergency management funds are spent locally. Hosting the Task Force in Des Moines this week, Mayor Frank Cownie has been repeatedly faced with extreme weather in his community and has become a champion of local climate preparedness efforts.

“Because of the recent flooding seen in Des Moines, our community has identified proactive steps in order to move forward and be prepared for future climate emergencies,” said Mayor Cownie, who is also an inaugural signatory of the Resilient Communities for America Campaign. “I’m proud to be a part of the leading climate resiliency movement for local elected officials, and have confidence this report and its recommendations are essential to improving local community resilience.”

“Local governments have been leaders in mitigation and adaptation efforts to strengthen our communities against the impacts of climate change,” said NLC First Vice President Ralph Becker, mayor of Salt Lake City, Utah. “While the environmental consequences of a changing climate may vary by geography, we are unified in recognizing the critical role of the federal government to support cities building resilient communities. These include policies, programs, tools and resources that support and augment our resiliency efforts, provide incentives and encourage innovation.”

Last November, President Obama announced the creation of the Task Force on Climate Preparedness and Resilience to advise the Administration on how the federal government can respond to the needs of communities nationwide that are dealing with the impacts of climate change. Made up of state, local, and tribal leaders, the President’s Task Force was established to develop recommendations on ways the federal government can remove barriers to resilient investments, modernize federal grant and loan programs to better support local efforts, and develop the information and tools needed to prepare for climate change. The Task Force will finalize its recommendations to the President this summer.

Two-thirds of the local officials on the Task Force are ICLEI USA members and/or Resilient Communities for America signatories.

The Resilient Communities for America Campaign is a national movement of local elected officials who commit to creating more prepared communities that can bounce back from extreme weather, energy, and economic challenges. Since its launch last June, more than 165 officials from 36 states plus the District of Columbia have signed on to the campaign, pledging to take action on creating communities that are stronger and more prepared for extreme weather and climate change. The campaign is a partnership between the National League of Cities, the US Green Building Council, World Wildlife Fund, and ICLEI USA.

As a result of the formation of the President’s Task Force, the Resilient Communities for America partners developed the Federal Policy Initiative to generate new insights on federal climate preparedness policy in the realms of disaster preparedness, built systems, natural resources/ agriculture, and human health/community development. The President’s Task Force Policy Initiative Report is a product of this initiative.

About National League of Cities

The National League of Cities (NLC) is dedicated to helping city leaders build better communities. NLC is a resource and advocate for 19,000 cities, towns and villages, representing more than 218 million Americans.