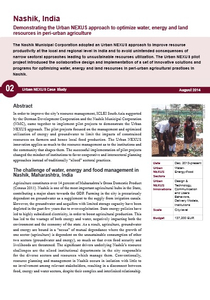 The Resilient Cities Asia Pacific Congress 2015 took place in Bangkok, Thailand on 11-13 February 2015 with the view of providing an Asian-Pacific platform for urban resilience and climate change adaptation.

Dialogues are conducted to forge partnerships, with the ultimate goal of identifying implementable solutions and creating lasting impacts for cities in the region. It also opened the opportunity to extend the Durban Adaptation Charter (DAC) to one of the world’s most vulnerable regions to climate change. New signatories include those from Pacific Island countries greatly impacted by sea level rise.

Discussions on increased urbanisation, climate change and globalisation then prompt cities to:

Emani Kumar, Deputy Secretary General of ICLEI – Local Governments for Sustainability notes “Putting people at the core of every resilience building effort was an overarching theme of the Resilient Cities Asia Pacific congress. The usually forgotten social aspects of planning for urban resilience – collaboration, awareness and capacity building, gender integration and financing programs – were highlighted more prominently in addition to infrastructure development and urban risk assessments“. With its view of forging partnerships, key focus was placed on an inclusive urban resilience. Discussions highlighted the value of South-South Cooperation and peer-to-peer learning where lessons could be exchanged between resource-constrained contexts facing similar challenges and opportunities to redefine development.

Among these discussions is one that establishes links between resilience and the Urban Nexus, which featured pilot cities in Nashik, India and Kinondoni in Dar es Salaam, Tanzania. As a systems approach that necessitates vertical and horizontal integration for a resource-efficient city, it emphasised the value bringing different levels of governments and sectors to work together on the cross-cutting issue of climate change. This paves the way for a smart use of resources, and ultimately supports the idea of an inclusive and “pro-poor climate resilience”.

After all discussions highlighted importance of understanding the local context not only in forging genuine partnerships, but also in identifying risk and shaping sustainable solutions. The reality of poverty shaping the conditions of the most vulnerable to climate change underscores the need to empower all sectors—especially marginalised groups—both as agents and beneficiaries of climate resilient development. In the same vein it drives innovation towards solutions that would simultaneously uplift communities and make them adaptive and resilient to climate change, made possible through cross-sectoral partnerships. Region-specific adaptation tools such as the ICLEI-ACCRN Toolkit and ResilientAfrica Tool are among the resources that cater to this.

It is on this note that the Resilient Asia Pacific 2015 Congress concluded – by placing people at the core of urban resilience. As Pasadee Thamthai, the Vice Governor of Bangkok, notes: “Resilience starts with people. There can be no resilient cities without resilient people”.

Be on the lookout for announcements on the upcoming Local Climate Solutions for Africa 2015 Congress, the regional platform on urban resilience due to take place at the end of this year.