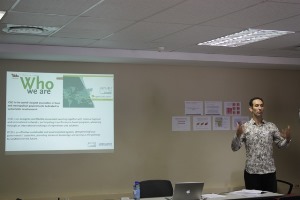 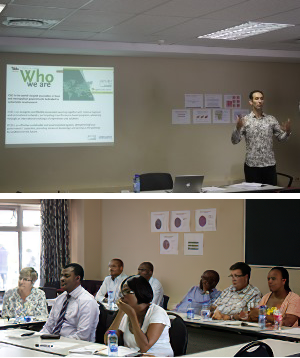 The end of February saw workshop participants from Steve Tshwete map out four possible low-emission development futures for the area.

This workshop was the first of two exciting scenario planning exercises designed to bring local people together around a common vision for sustainable, low-emission growth and prosperity in the region.

Low-emission development involves making decisions now that can reduce local air pollution, and energy use, as well as create jobs and investment opportunities into the long-term. The world is increasingly focused on the global impact of carbon emissions arising from the burning of fossil fuels, and those local areas that act now will become the prosperous places of tomorrow.

Over 30 people from the Municipality, District and Provincial government, business, NGO’s and local community spent an intensive day getting to grips with the key development, growth and energy challenges facing Steve Tshwete. Four initial and possible futures were developed. One future involved everyone working together to become low-carbon, but a lack of incentives and regulation letting them down and preventing widespread change. Another future saw a positive local mindset, backed up by regulations and incentives, delivering a low-carbon, economically-inclusive future Steve Tshwete by 2030.

The Executive Mayor of Steve Tshwete, Cllr Mike Masina, made an opening address to the workshop in which he supported the initiative, saying that low emission development is “everyone’s business”. He also encouraged communities to get involved in projects that led to a desired future for the region, and said that we should be elevating the importance of sustainable development to that of the major health epidemics faced in the region. “We have done enough damage”. He said that there were many opportunities for schools to take action, and also for raising awareness through learner education.

The scenario planning process, which will continue later this month, is convened as part of a partnership programme between the Municipality and the NGO ICLEI – Local Governments for Sustainability – Africa. The Urban Low Emission Development (Urban-LEDS) project is working with Steve Tshwete and six other municipalities in South Africa, to design and integrate measures to create jobs and improve the local environment through reduced carbon emissions.

The Urban-LEDS project directly builds on existing initiatives currently underway in the municipality and progress so far has included the completion of Steve Tshwete’s first ever Green House Gas and energy profile – results of which will be released publicly this year. The scenario planning results will feed directly into the Integrated Development Plan going forward, and building on the outcomes of the Clean and Green Indaba that was held by the municipality in September 2013.

“The project is being implemented by ICLEI- Local Governments for Sustainability – Africa, in partnership with UN-Habitat and funded by the European Commission”.

To find out more, watch out for the workshop report which will be shortly released, or contact: Steve Thswete Municipality contact: