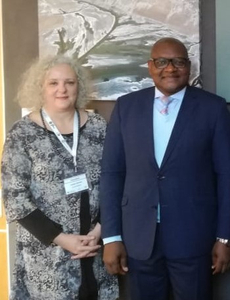 In his thought-provoking and inspiring speech – just a day after nations of the world marked the United Nations’ World Environment Day – the Premier highlighted the need for local and subnational government leaders in Africa to respond to the global call for action, to take practical steps, as leaders on the continent, to protect our planet through building environmentally sustainable cities.

In introducing Gauteng Province, he hailed the role of local and subnational government associations, stating “We, as a province, are a member both of the UCLG-Metropolis, as well as of ICLEI. These are important platforms that are key to shaping the role and place of cities in the development of today’s world.”

He observed that since its inaugural meeting in 2015, the ACCSF has grown in leaps and bounds, both in size and stature. It continues to attract participants from more and more African capital cities and is one of the platforms that is promoting the role of regional and city governments in the continental and global affairs.

He pointed out that rapid urbanisation is one of the most dominant megatrends of our time, and that sub-Saharan Africa is undergoing the largest wave of urban growth in history. And that our current reality is that Africa’s cities are becoming dynamic urban centres of new innovations, smart industrialisation and entrepreneurship.

“These cities and megacities are driving Africa’s new industrial revolution; that is clean, green and ecologically sustainable. They are leading the charge towards the kind of Africa we want; an Africa rising together with her people,” he said. “We have to deal with the challenge of inadequate infrastructure, poor urban planning, financial viability and environmental sustainability of our cities.”

He encouraged those leaders present to join the many progressive national, regional and city governments of the world who take action to protect our planet, reduce the carbon footprint and mitigate human-induced climate change and all its disastrous consequences.

The Premier referred to the African Union Agenda 2063, The Africa We Want, which is a consolidation and synthesis of a vision that has evolved over a period spanning a century. “Africans have been central to shaping this dream and they must be central to its realisation,” he said. “I am absolutely certain that one thing we need to add into the African Dream is the centrality of African cities.” The role of African cities needs to become more relevant and more pronounced in order to achieve this dream, and there is a need for all levels of government to work together to ensure this.

He ended his address with a call to action: “Let us use our positions of authority to build inclusive and cohesive cities that bring our diverse city residents together. Let us work for the African Dream which places cities and sustainability at the centre of Africa’s new development trajectory and inclusive growth path.”

***
Gauteng Province is a proud member of the ICLEI network.