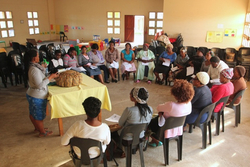 ICLEI Africa has been working with seven municipalities within South Africa on the Urban LEDS (low emission development strategies) project, funded by the European Commission, and implemented by UN-Habitat and ICLEI.

The project has the objective of enhancing the transition to low emission urban development in emerging economy countries. It supports selected local governments in Brazil, India, Indonesia and South Africa with a comprehensive methodological framework, known as the GreenClimateCities methodology. This aims to integrate low-carbon strategies into all sectors of urban planning and development within their municipalities.

Doornkop solar solution:
An 18kWp solar PV system has been installed at the Doornkop community centre, which is used for various purposes including a soup kitchen, CPWP and adult education. The system boasts 68x 260w solar panels, 32 batteries and six inverters. It can be used during the daytime for appliances in the community centre, crèche and old age day care centre, while also providing lights at night for a few hours.

The provision of power through the solar PV system paved the way for the introduction of additional security lights, which were installed around the community centre and surrounding buildings. A solar streetlight was installed at the entrance to the centre to also provide light to the surrounding area. Cognisance was also taken of the need for warm water, and two 150-litre solar water heaters were installed, on the roof of the community centre and caretakers home.

For the first time the crèche and old age day care centre were supplied with plug points and internal lighting. To improve the quality of internal spaces for the crèche and old age day care centre, ceilings were installed in both buildings. This helps to keep the building warmer in the winter and cooler in the summer.
Various benefits have been highlighted, including the CDW team now being able to charge their cellphones which they use for capturing project implementation, the fridge in the kitchen for food used by community kitchens, learners can study in the evening and community members can have meetings in the evening and use the data projector for presentations. Safety has improved and with electricity in the crèche and old age home they also improved living conditions.

Grootkloof EE Centre going off grid
Funding was allocated to improving the environmental performance of the Grootkloof Environmental Education Centre, situated in the Van der Kemp’s Kloof Nature Reserve in Port Elizabeth. The first thing was to replace 161 lights with efficient LED lights and thus reduce the energy needed for lights by 59%. A solar water heater was installed to heat the water used in the showers, while the existing instant geyser was kept as a back up.

A total of 20 photovoltaic panels (255W) were installed, with a battery backup and grid connection, which allows excess energy to be fed into the grid. This can provide an estimate of 7950kWh/a, which is a saving of 7,8ton CO2 and 34,4kg SO2 per year. The system operates all the lights, offices and classrooms during load shedding. A smart meter was installed to allow grid tie and feed in.
In addition to the electricity the importance of water was also highlighted. A 3-phase water filtration system with a particle filter, ultra-filter and UV filter of up to 22,500 litres was installed for the rainwater harvesting at the centre. This provides water that is in line with potable water standards and the municipal water connection is now used as a back-up supply, if required.

To display some other practical solutions to the local community the centre also received a Mobiya mobile solar PV with LED light from Schneider Electric, a Wonderbag insulation cooker and counter top compost container. These cost effective solutions can be implemented by any household as part of their contribution towards reducing carbon emissions.

Schools and libraries switching over:
The project also implemented the lighting retrofit of the Empangeni library in uMhlatuze, and implementation of Solar PV panels. This included 23 panels of 260w each, which provides a potential capacity of 6kW, linked to an invertor and eight batteries. 337 lights were replaced with LED lights, which led to a 60% reduction in energy consumption for lights.
The Mphe-Thuto Primary School in Magaliesburg also participated in the project where a solar water heater and skylight was installed, while all the lights were replaced with energy efficient lights. Working with other partners the school also received solar PV, biodigester and food gardens to help them on their journey to be more sustainable.

Taking it home:
As a showcase of what can be done at home, twenty care homes managed by the Child Welfare Association participated in the programme and received food gardens, Wonderbags, Mobila solar LED lights. They will hopefully also receive their solar water heaters in the next few weeks as soon as a service issue has been sorted out.

All around the showcase projects have demonstrated in a practical manner that resource efficiency and sustainability is both relevant and beneficial for people across the socio-economic spectrum, contributing to a local and global effort to reduce emissions and adapt to climate change.