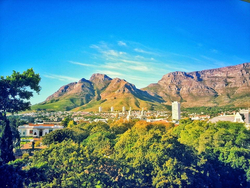 The following speech was delivered by City of Cape Town Executive Mayor, Patricia de Lille, at the full sitting of Council today, 28 April 2016.

I would like to observe a moment’s silence for former Member of Parliament, Dene Smuts, who passed away last week, seven-year-old Tyler Jansen from Ravensmead, and former Pan Africanist Congress president, Clarence Makwetu.

I also to take a moment to say to Mayoral Committee Member, Councillor Suzette Little, and VIP driver, Nuur Perrin, who endured a traumatic experience with an attempted hijacking on Tuesday night, that you are in our thoughts and prayers and we are grateful that you escaped serious harm.

I also want to make an appeal to councillors to make sure that they activate their neighbourhood watches to patrol their areas to assist the police.

I am sure that we have all noted the recent rains that have challenged our emergency services.

While heavy weather challenges us, I cannot help but be thankful for the effect on our dam levels in this time of drought.

The City of Cape Town has committed itself to being the best-governed municipality in the country.

We have pushed ourselves with the targets we set and have implemented programmes in line with international best practice in the public sector.

As such, it is gratifying when our efforts are recognised and celebrated by independent assessments.

Ratings Afrika has analysed the 2014/2015 financial statements of the 100 biggest municipalities.

Cape Town scored 75 – the highest out of all metros, with Johannesburg scoring 37, Ekurhuleni at 70, Tshwane with 24, Nelson Mandela Bay at 58, eThekwini scoring 50 and Buffalo City at 73.

Indeed, this survey reveals a great disparity in that the two cities with the highest income per household scored drastically lower than Cape Town.

The agency stated that decisive political leadership is needed to correct the bad state of municipal finances in the most troubled municipalities.

It noted that leaders need to look at the interests of their residents and businesses rather than their own, root out corruption, and appoint competent managers with the necessary skills to implement budgetary processes and exercise financial discipline.

This is precisely the kind of action that has been taken in Cape Town and the results show – not only in our excellent financial management position, but in our work of service delivery.

Indeed, in the interests of service delivery, it has been a priority of this administration to provide for the housing needs of Cape Town’s steadily growing and increasingly urbanised population.

We have built 31 741 housing opportunities since we came into government in 2011.

These opportunities have been provided all across the city in areas like Ocean View, Belhar, Hangberg, Pelican Park and Langa.

This month, we handed over the first 30 houses for our development in Heideveld.

These are the first of the 738 families who are going to have their lives transformed through this R105 million development in Heideveld.

This month also saw the official start of construction of the Delft Early Childhood Development (ECD) Centre of Excellence with a sod-turning ceremony.

The R12 million construction project is anticipated to be completed in February 2017 and it is envisioned to accommodate approximately 160 children in Phase 1, which can be extended to 400 in Phase 2 should the need arise.

The facility on the corner of Cork Tree and Sapele Road, Delft will also boast its own food garden which will supply the centre with a variety of fresh produce.

The centre will have a toy library as well as an educational outdoor play area.

The Delft Centre of Excellence is one three construction projects started by the City’s Social Development and Early Childhood Development Directorate in the current financial year.

The Nantes Centre of Excellence in Athlone is making good progress as construction is envisioned to be completed in July 2016, while construction of the Golden Gate ECD in Netreg is completed and the process to appoint an operator is under way.

These interventions are just some of the ways in which we are building a more caring city.

This approach also enjoins us to redress the wrongs of the past, which we do through our whole approach to public policy and through signature projects like the Mayoral Redress Programme.

Council made an allocation of R20 million available for the Mayoral Redress Programme following a study to identify areas of poverty which required special intervention to address infrastructure backlogs over and above those targeted through ward allocation funding.

The Phola Park redress project in Philippi is one of the most significant ones we have undertaken, where R6,6 million was allocated to cover a badly degraded open stormwater channel, pave footways, and plant trees to enhance the public space.

The City has responded to the cries of the community who faced ongoing health problems as a result of the bad pollution of the channel.

Despite ongoing maintenance and cleaning by the City, the open channel continued to be used as a dumping ground, resulting in high levels of bacteria, and was attracting mosquitos, posing a serious health risk to the community.

This project aimed to upgrade the stormwater channel to improve the inland water quality and the health and safety of the community.

Work started in August 2015 and is now in the final stages of completion.

A few days ago I visited Phola Park and I am pleased with the improvement that the project has brought to the lives of residents in this community.

What was once a badly polluted channel is now utilised by residents as a walkway where children can play safely and parents no longer have to worry about the health risks.

While significantly improving the community’s living conditions, this project also provided work opportunities to 20 residents who were selected from the subcouncil’s jobseeker database.

In addition to the investment from the Mayoral Redress Programme, the City’s Utility Services Directorate also provided residents with new bins, while an additional R1,3 million was allocated to provide 163 toilets.

Mayoral redress projects have also been rolled out in Macassar, Bellville South, Phola Park, Scottsdene, Wallacedene, Elsies River, Belhar, Delft, Valhalla Park, and Gugulethu (in the form of the project to replace the old concrete roads).

These projects are helping us build a more lasting reconciliation in Cape Town by addressing the injustices of the past.

In addition to this, we have also been making the metro more inclusive in our drive to become a truly digital city.

Last week, we passed the threshold of having more than 200 public W-Fi zones.

The City now has 201 public Wi-Fi zones clustered in 78 locations spread across the metro area. In the past week, more than 84 000 residents have used the service.

Most of the Wi-Fi zones installed so far are in suburbs and centres that have been neglected by commercial service providers, or where residents find commercial internet services too expensive.

These include Nyanga, Kraaifontein, Seawinds, Philippi and Khayelitsha, among others.

The Wi-Fi service operates on top of the City’s fibre-optic network, which both reduces the direct costs and ensures a high quality of service.

The combination of a significant daily data allowance, fast access speeds, and the wide distribution of Wi-Fi zones means a truly useful service that makes a difference to the lives of many residents.

We are able to do this at minimal cost to the ratepayer by using our own existing network infrastructure.

We have achieved this with a capital budget of only R5 million for each of the last two years, which is much better value for money than the hundreds of millions that some other municipalities have spent by fully outsourcing the service – at the end of which they do not own any of the infrastructure they have paid for.

Since its inception, over 460 000 residents have used the public Wi-Fi service.

These kinds of investments are making us an attractive destination for a range of international partners, as demonstrated by the official visit we received from the City of Izmir in Turkey.

We committed to provide the Aegean Chamber of Industry, Izmir Chamber of Commerce, Aegean Free Zone, and Izmir Ataturk Organised Industrial Zone with proposals on how to increase tourism, trade and investment levels between the two cities.

In October 2015, Turkish Airlines started direct flights between Cape Town and Istanbul. We appreciate this as a good foundation to build increased tourism between our regions, thus providing the foundation for increased flows of investment into Cape Town.

It is action like this which has led to Cape Town having a lower unemployment level than the rest of the country – a proactive approach that actively promotes business and investment.

In conclusion, we now have an election date scheduled for 3 August 2016.

Many councillors in this chamber will hope to return in the new council but some councillors won’t.

Whatever the next council may hold, and whomever will be a part of it, we must all remember that we were elected for a full five years.

That means the duties and obligations we have to our constituents remain until the election.

We need to continue demonstrating leadership and playing our part to ensure that our democratic system is respected and given meaning.