The first remote and virtual ACCSF discussion focused on capital cities’ role in their nation’s response to Covid-19 with an emphasis on the need for co-operative multi-level governance.

On Thursday, 23 July, altogether 29 mayors, governors, presidents and representatives from their respective capital cities from across the African continent assembled for an African Capital Cities Sustainability Forum (ACCSF) webinar – the first in a series of digital events in which ACCSF member parties discuss shared sustainability efforts while meeting head-on the diverse challenges posed by the current Covid-19 pandemic in working towards steering our urban communities on the road to an inclusive and green economic recovery.

The event was attended by representatives from Cape Town to Rabat, from Dakar to Nairobi, and provided a platform for these capital city leaders to unpack the socio-economic and health impacts Covid-19 is having on their cities. The discussion demonstrated that, due to the nature of a capital city usually being the focal point for any economy’s commerce and industry, these cities often turn into the epicentres of pandemics. Strengthening resilience in capital cities is therefore fundamental and can spearhead and lead country-wide recovery journeys and to ensure we are #BUILDINGFORWARDBETTER.

First launched in 2015 and traditionally convened over two days in the ACCSF’s host city of Tshwane, South Africa’s capital, the event has been converted into virtual dialogues this year, as a result of the global health crisis precluding travel. Several mayors joined as high-level speakers for a discussion that focused on capital cities’ role in their nation’s response to Covid-19, and which emphasised the need for co-operative multi-level governance.

Lord Mayor Mohamed Sadiki of Rabat spoke powerfully about the solidarity fund, driven jointly by national and local government, that has enabled Morocco’s capital city to provide aid to 20 million citizens, and even extending aid across their national borders to other African cities in need. Rabat remains one of the continent’s greenest cities and continues to drive climate action for a sustainable city that can withstand future shocks.

Kenya’s Cabinet Secretary for Health Senator, Mr Mutahi Kagwe, representing H.E. the Governor of Nairobi Mike Mbuvi Sonko, shared their capital city’s effective Covid-19 response measures. While the city’s economy has no doubt been impacted by the disease, a nationwide curfew has helped in keeping infection numbers relatively low. Kenya’s government has made subsidised loans available to small, medium and macro enterprises which have gone a long way in providing economic relief to its citizens. In further securing their population’s safety, the national government has ensured adequate water supply and handwashing facilities in all public areas, and has set up food aid for the most vulnerable members of society. The Minister commented that Nairobi, like any other city in the world, endured a fair share of challenges, but continues to draw lessons from other cities, saying that a forum such as the ACCSF is crucial today, as it “comes at a time where we can all learn from each other.”

H.E. Erias Lukwago, Lord Mayor of Kampala City Council Authority, Uganda, echoed the relevance of the platform in these times: “We need to use the platform to identify shortfalls and find interventions that can boost our common voice. We need a forum of experts to devise mechanisms to make the SDG11 for sustainable cities possible.”

The mayoral exchange manifested the strong momentum to ‘buildforwardbetter’ – in other words, that building sustainable, resilient cities in harmony with nature are key to responding to such large-scale crises, that there is much to be learned from each other, and that the solutions to these compounding challenges can be shared first-hand and instantly, as they emerge.

Mayor Roheyatou Lowe of Banjul, The Gambia, reflected on the ACCSF’s common goals: A staunch women’s rights advocate, Mayor Lowe shared her city’s actions to provide food assistance support to women: “We should invest more in socio-economic development of our cities as it is the key pillar to progress to our cities. Let us continue to build synergies to not only curb the spread of this pandemic but also to make sure that sustainability of our cities stays a priority.”

The City of Dakar’s Secretary General, Mr Mourade Dieye Gueye, representing the Mayor of Dakar, said that similarly to Banjul, the capital city’s strategy is in line with Senegal’s national Covid-19 response strategy, and, similar to Morocco, Senegal put in place a solidarity fund and took further actions, including rehabilitating medical facilities, equipping hospitals to screen people disinfected schools and other public facilities. Most notably, a curfew and closed borders slowed down the infection rate, but it also brought economic activity to a near-halt; the state has therefore put in place a nationwide economic resilience plan. 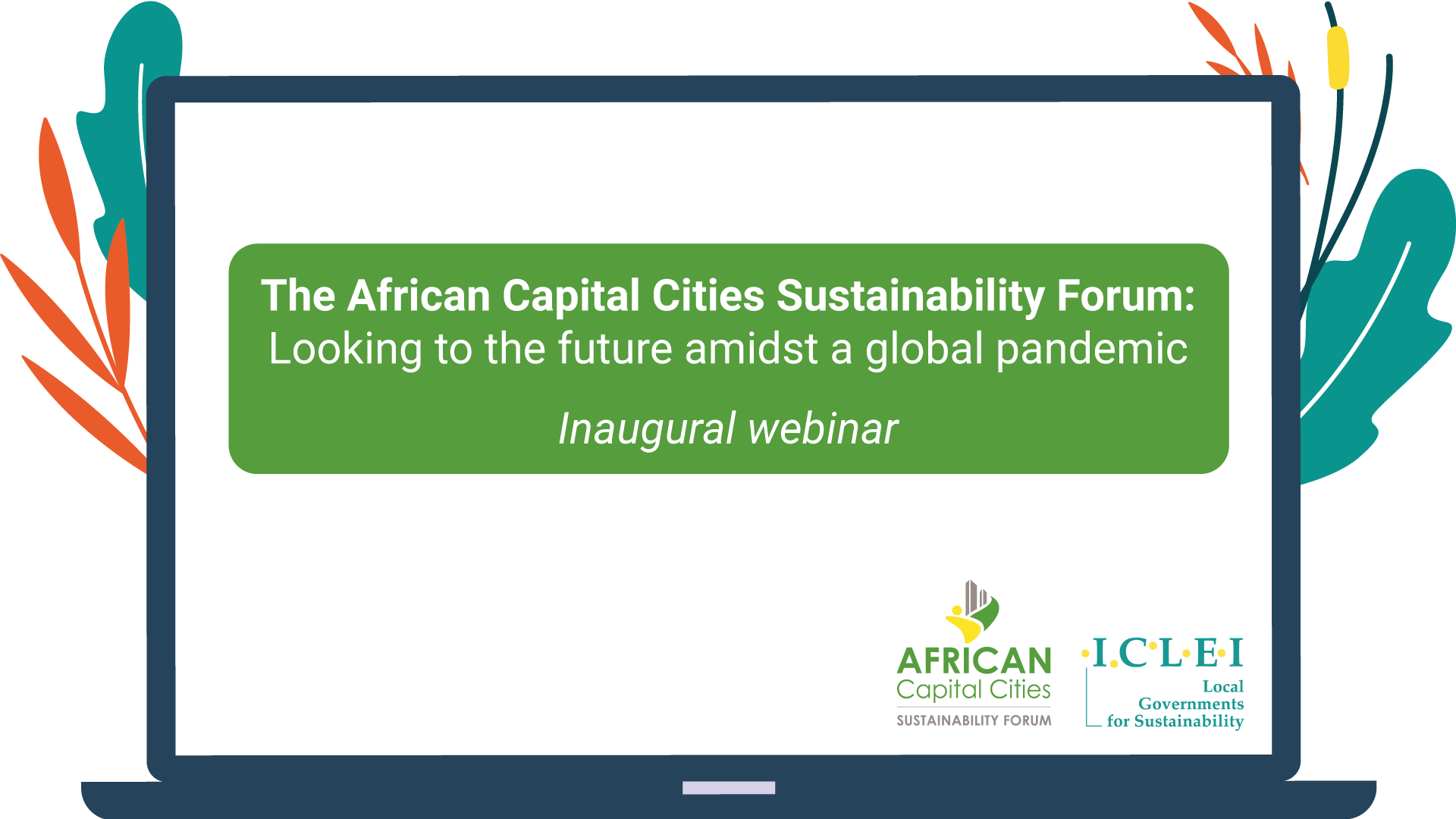 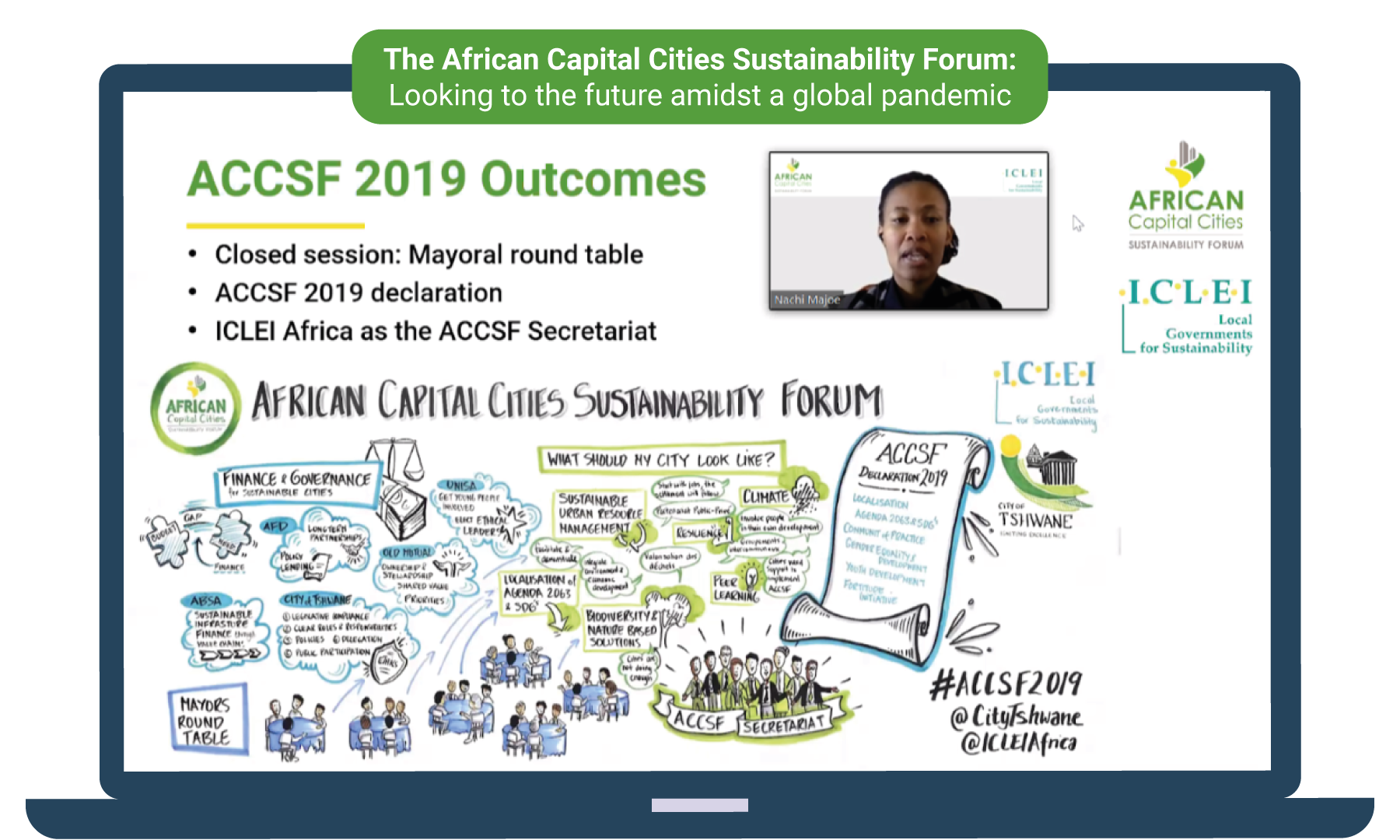 City representatives further sought to address the challenges that are endemic to their governing structures and agreed that a ‘one-size-fits-all’ approach has proven ineffective on the African continent. Cities are forced to innovate rapidly and find local solutions to lower the spread of the virus in public places where social distancing cannot be maintained. Both the capital cities of Moroni (Comores) and Maputo (Mozambique) have put in place measures to disinfect marketplaces where it is not possible to enforce social distancing. Furthermore, a great need for synergy between national and local government to raise awareness among citizens and unlock finance at the local level persists in many cities across the continent.

In closing, ICLEI Africa Regional Director Kobie Brand, acting as interim chair of the meeting, thanked all the mayors, governors and their representatives in attendance, for their invaluable contributions. Every intervention has expressed the need for the ACCSF to convene regularly: “We need to make clear what the power and mandates are [and] we need to understand how we can improve a collective voice in capital cities. Pandemics first manifest in capital cities and large cities, which are also our economic engines on the continent.” She also highlighted that Covid-19 is a wake-up call for cities across the world to localise and address the SDGs together. In the face of a global health pandemic that has had a fundamental impact on the mechanisms in place to drive economies — unsustainably — the need for cities to take hands, empower each other, build better information systems, capture lessons learnt, share solutions and build resilience together is vital to withstand future shocks.

The inaugural virtual African Capital Cities Sustainability Forum in July 2020 has set the tone for continuous and direct dialogue between mayors as cities navigate their way through Covid-19 together, until and even after they can meet physically again.

The capital cities voted for the series of virtual dialogues to take place on a quarterly basis, and identified informality and unlocking finance as upcoming themes, while the current pandemic will be one of several crosscutting themes throughout this series.