The day we changed history! The Peoples Climate March 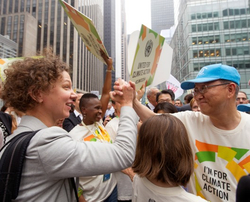 Most notable, whilst this was impressively large, global support for this event took place around the globe in over 3000 events in over 150 countries, resulting in over a million people from around the globe marching for the same cause! Importantly for the African continent is that this march was led by and heavily supported by low-income communities, indigenous groups and labour unions, making a statement about who climate change is impacting first, and why this is not just a green movement but a social justice movement. In Africa too marches have taken place in: Togo, Niger, The Ivory Coast, Benin, South Africa (Johannesburg, Durban and Cape Town) and Africa’s largest city Lagos, took to the streets.

“Only when you move, you can move the world. I am excited to be part of a Mayors Delegation joining todays People Climate March and thereby to join a global pro climate movement. On Tuesday, we will attend the Secretary Generals Climate Summit and demonstrate our commitment and engagement – via the Compact of Mayors and by carbonn, the Bonn based international reporting platform compiling initiatives and achievements of the local level worldwide.” said mayor Jürgen Nimptsch.

“We said it would take everyone to change everything — and everyone showed up,” said Eddie Bautista, Executive Director of the New York City Environmental Justice Alliance.

“The frontlines of the climate crisis are low-income people, communities of color and indigenous communities here in the US and around the globe. We are the hardest hit by both climate disruption––the storms, floods and droughts––as well as by the extractive, polluting and wasteful industries causing global warming,” said Cindy Wiesner, Co-Director of The Climate Justice Alliance. “We are also at the forefront of innovative community-led solutions that ensure a just transition off fossil fuels, and that support an economy good for both people and the planet.”

“Today, civil society acted at a scale that outdid even our own wildest expectations. Tomorrow, we expect our political leaders to do the same,” said May Boeve, Executive Director of 350.org