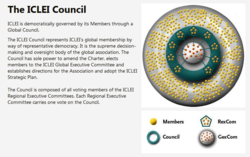 It is our pleasure to announce the new ICLEI Africa Executive Committee for the period of 2015-2018. This new pan-African leadership body was elected in the governance process that culminated at the end of last year.

The ICLEI Africa Committee represents the ICLEI Members of Africa. As with each other region’s Committee, it consists of several thematic seats, elected by the ICLEI Members, from a list of candidates from the region. ICLEI is a global association of local governments that prides itself on being driven by its network of Members.

Therefore, ICLEI’s governing bodies, responsible for defining its strategic direction, are made up by local government Mayors and elected officials and are elected by all ICLEI Members, every three years, in their respective regions. We are honoured therefore officially to confirm the appointment of the following Mayors to serve on the Regional Executive Committee for the Africa region of ICLEI (here listed in alphabetical order):

Mayor Martin Kizack Moyo of the City of Bulawayo, Zimbabwe, for the portfolio of Health, Water, Sanitation and Waste

Mayor Mpho Parks Tau of the City of Johannesburg, South Africa, for the portfolio of Energy and Mobility

Once again, we would like to extend our congratulations to the honourable Mayors and their local governments; we very much look forward to their participation. For more information on Executive Committee structure and responsibilities, please consult the ICLEI Charter.