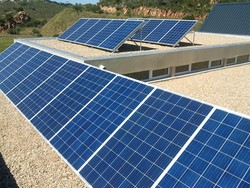 Nelson Mandela Bay Municipality (NMBM) is pleased to announce the unveiling of the Grootkloof Environmental Education Centre, situated in the Van der Kemp’s Kloof Nature Reserve in Port Elizabeth. This centre has been built by the local municipality with the aim of providing a venue for environmental education to the local community.

Funding was allocated to improving the environmental performance of the building through the Urban LEDS project, while also using the venue to illustrate to the community what they can do. The first thing was to change 161 lights to more efficient LED lights and thus reduce the energy used on lights by 59%. Then the focuses shifted to heating the water, which is usually the largest consumer of energy at home. A solar water heater was installed to heat the water used in the showers, while the existing instant geyser was kept as a back up.

A total of 20 photovoltaic panels (255W) were installed, with a battery backup and grid connection, which allows excess energy to be fed into the grid. This can provide an estimate of 7950kWh/a, which is a saving of 7,8ton CO2 and 34,4kg SO2 per year. The system operates all the lights, offices and classrooms during load shedding.

In addition to the electricity the importance of water was also highlighted. A 3-phase water filtration system with a particle filter, ultra-filter and UV filter of up to 22,500 litres was installed for the rainwater harvesting at the centre. This provides water that is in line with potable water standards and the municipal water connection is now used as a back-up supply, if required.

To display some other practical solutions to the local community the centre also received a Mobiya mobile solar PV with LED light from Schneider Electric, a Wonderbag insulation cooker and counter top compost container. These cost effective solutions can be implemented by any household as part of their contribution towards reducing carbon emissions.

NMBM has furthermore developed their greenhouse gas inventory and a case study has been written up about their experiences of being a leader in South African for promoting small scale embedded generation. In November 2013 the city also hosted the first project international networking seminar, which saw officials and politicians from Brazil, Indonesia, India and Europe come together to exchange good practice towards low emission development. NMBM is one of only a few South African municipalities that has committed to the Compact of Mayors and took part in the WWF-ICLEI Earth Hour City Challenge competition in 2013 and 2014. The Grootloof is a practical example of their wider commitment to sustainability as a leading ICLEI member.