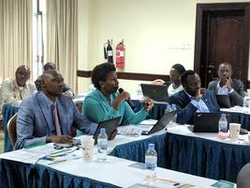 The Ministry of Environment and Rwanda Environment Management Authority have hosted the launch of the Urban Low Emissions Development Strategy (Urban-LEDS II) Project. The project will contribute to the reduction of greenhouse gas emissions in Rwanda by promoting and developing low carbon development strategies in selected cities and towns.

This will contribute to achieving Rwanda’s Climate Action Plan, also known as Nationally Determined Contribution (NDC) as part of the Paris Climate Agreement, as well as the Sustainable Development Goals (SDGs).

The project, now in its second phase, is being implemented in Rwanda after a successful first phase in South Africa, Brazil, India and Indonesia. The three-year project is funded by the European Commission and implemented by UN-Habitat and ICLEI-Local Governments for Sustainability

The cities of Kigali, Rubavu and Muhanga will be the focus of the project and will join an international Urban-LEDS community that is comprised of 65 cities across Brazil, Colombia, Indonesia, Laos, India, Bangladesh, South Africa, and Europe.

Opening the launch, Coletha Ruhamya, Director General of the Rwanda Environment Management Authority, thanked the partners involved in the project, and encouraged collaboration to ensure its success.

“We are grateful to the Urban LEDS team for choosing Rwanda for the second phase of this project. As we implement our climate action plan, it will be crucial that Rwanda’s carbon footprint remains low. We can achieve the development we want without contributing excessively to climate change if we are smart and efficient in our planning and use of resources,” said DG Ruhamya.

At the launch, stakeholders from across government, civil society and the private sector discussed the scope of the project, as well as the cities and towns where it will be implemented. Participants designated the City of Kigali as the ‘Model City’, the city of Rubavu as the focus ‘Secondary City’ and the town of Muhanga as the smaller ‘Secondary City’. Other cities and towns across Rwanda will benefit from their experience through knowledge and lesson sharing.

The project will integrate climate actions into national and local development strategies, guide local governments to develop urban low emission development strategies, as well as funding proposals for international public finance institutions such as the Green Climate Fund. The Rwanda Environment Management Authority will act as the focal institution for the Urban-LEDS II Project.

Read the original article on the Republic of Rwanda’s Ministry of Environment’s website.