Cities in the spotlight at COP23 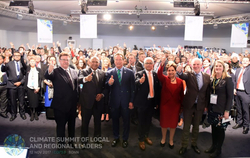 ICLEI, as the focal point for the Local Governments and Municipal Authorities (LGMA) constituency at the climate change COPs, always plays a significant role in promoting the important work that cities are doing to contribute to the amelioration of climate change, and COP23 was no different.

COP23 took place from 6-17 November this year in Bonn, Germany, hosted by the secretariat of the UN Framework Convention on Climate Change (UNFCCC), and presided over by Fiji.

Cities and Regions made their voices heard
One of the highlight events for subnational governments at this year’s COP was the Climate Summit of Local and Regional Leaders. This event provided a platform where pioneering initiatives and partnerships that support implementation of the Paris Agreement at the subnational level were discussed. Cities and regions brought their stories and commitments to COP23 through the Climate Summit of Local and Regional Leaders, the extended Summit Dialogues, and a diverse programme hosted by the Cities and Regions Pavilion, highlighting actions and contributions from all levels of government and non-party stakeholders. Jerry Brown and Arnold Schwarzenegger, the current and former governors of California gave keynote addresses at the Summit.
Read more.

Africa in the spotlight
ICLEI Africa hosted Africa Day at the Cities and Regions Pavilion on 9 November. The first of the Africa-focused sessions, organised in partnership with the South African Local Government Association (SALGA), focused on what African local governments are doing to contribute to Nationally Determined Contributions (NDCs).

The second session was hosted in partnership with the EUEI PDF (Energy Initiative Partnership Dialogue Facility). ICLEI Africa is partnering with the EUEI PDF to promote a study on Future Energy Scenarios for African Cities and unlock opportunities for climate responsive development within the African context.

The final session which was hosted by ICLEI Africa and the Covenant of Mayors in Sub-Saharan Africa, explored the challenges and opportunities for vertical integration between national and local governments for the implementation of the Paris Agreement.

Building strong bonds
The newly elected ICLEI Africa Committee (REXCOM) members met for the first time in person as a group over dinner at a typical German restaurant. It was an excellent opportunity to discuss expected outcomes of COP23, compare notes on sessions they were attending and exchange ideas on negotiating the COP experience. This helped build strong relationships that are needed to steer ICLEI Africa and drive the ICLEI vision over the next four years.

Building more efficient buildings and better cities
A side event on City Successes with the Building Efficiency Accelerator was held at the Cities and Regions Pavilion on 10 November. This included success stories from Building Efficiency Accelerator (BEA) cities. Executive Mayor Solly Msimanga from Tshwane, South Africa, provided insight into the progress the city has made around their Green Building By-law and developing Tshwane House, certified by the Green Building Council of South Africa. He encouraged other cities to join BEA as it has assisted them with monitoring and measuring their impact, which is critical for decision making. Elisabeth Chege from the Kenya Green Building Council also encouraged cities across Africa to join this initiative which drives more efficient buildings and helps to build better cities.

Driving a transition to sustainable consumption and production
On Friday 10 November, a practitioner’s meeting was held to allow interaction between the cities participating in the Global Leadership City Network for Sustainable Public Procurement. The following day, the 3rd High Level Assembly was held, with representation by Executive Mayor Solly Msimanga from Tshwane and Councillor Johannes van der Merwe from Cape Town, South Africa, as well as Seoul, Oslo, Ghent, Denver, Budapest and Auckland. The City of Tshwane has made great strides in the approval of their Sustainable Procurement Strategy, with concrete quantified targets, including a 10% overall target for sustainable procurement and sectoral commitments. Mayor Msimanga also announced that 40% of the city’s bus fleet will be green by 2020. Cllr van der Merwe explained details of the City of Cape Town’s Green Economy Strategy, including a target for 20% renewable energy in city buildings by 2020.

Al Gore and Mayor of Bonn talk climate action
Over 40 mayors and local political leaders from around the world convened on 11 November for a screening of An Inconvenient Sequel, the latest climate change film from Al Gore, followed by a conversation with the former US Vice President on the state of climate action. Executive Mayor Msimanga of Tshwane, South Africa, spoke to the importance of action at all levels, encouraging nations to set targets ambitious targets but emphasizing that implementation happens at the local level.
Read more.

Local and regional leaders adopt Bonn-Fiji Commitment
On 12 November, the hundreds of local and regional leaders gathered at the Climate Summit of Local and Regional Leaders adopted the Bonn-Fiji Commitment of Local and Regional Leaders to Deliver the Paris Agreement at All Levels, a pledge that signals their commitment to bring forward a critical shift in global development and their intention to work in partnership with all levels of government.
Read more.

A real national to local conversation on climate governance
On 16 November, the NDC Partnership and ICLEI took a closer look at multilevel governance for climate action. Mayor Araújo of Quelimane, Mozambique, made a valuable contribution to the discussions, speaking about his experiences in establishing better multilevel collaboration in his country.
Read more.

Read the Cities and Regions Daily Digests for a wrap-up and overview of news and events from COP23 that are relevant to local and subnational governments.